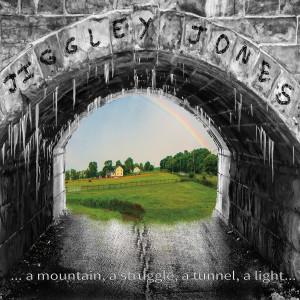 Americana singer songwriter Jiggley Jones releases his first album with Lamon Records. “…A Mountain, A Struggle, A Tunnel, A Light…” was recorded with Lamon Records at Kingswood Studios in Nashville back in January 2014.

The album showcases Jones’ unique vocal style and poignant lyrics. Standout tracks include the haunting first single, “Walk On Me,” which is doing well on indie radio stations across the globe. “Early Morning Light,” a unabashed love song, has an infectious melody. Jones filmed the music video for “Walk On Me” in Nashville. It centers around a husband waiting around at home for his wife who would rather be out at the bars with her friends.

“I have to say the new direction will put me square down the middle of the Americana genre, a great place to be,” Jones says. “Producer Dave Moody has given me that slightly raw, organic sound that really pushes my vocals to the forefront.”

Jiggley Jones traveled and played with many different bands. In the past, he tried to make his music fit to the times. He kept current, even as his personal musical tastes kept evolving. Now, Jones writes what he what he knows, keeping the artistic mystique of a singer-songwriter while writing about love, life, and being a husband and father. Settling into an alternative folk sound suits Jones well for this stage in his life. Fortunately for him, this inspiration came at a great time; Americana is current and uniqueness is hip.

In an article for examiner.com, writer Donna Nolan-Wilson has this to say about the Coatesville, PA native: “It really doesn’t get more real than Jiggley Jones. His life, his outlook and his love for his family are all quite evident when you speak to him… What I discovered is that Jiggley is very rooted, very serious and a very talented singer songwriter. What can I say folks, his music speaks for itself.”

“…A Mountain, A Struggle, A Tunnel, A Light…” is available now on iTunes, Amazon, and everywhere music is sold. Learn more about Jiggley Jones and other Lamon Records artists, visit www.lamonrecords.com.